Alpine's return to endurance racing confirmed with its 2013 Le Mans 24-hour racing car, the No36 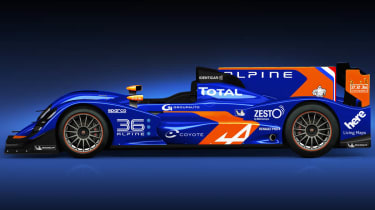 After announcing entry for the 2013 Le Mans 24 hours, Alpine-Renault has revealed its No36 endurance racing prototype.  The No36 is a collaboration between Alpine and single-seat racing veterans Signatech. Under the blue and orange livery is a 900kg Alpine chassis powered by Nissan’s VK45 4.5-litre V8 engine, producing around 500bhp. The No36 uses a six-speed sequential X-Trac gearbox and has a top speed of over 200mph.  Alpine hopes a return to endurance racing after a 35-year absence will help reestablish brand popularity before the 2016 launch of the new Alpine-Caterham road going sports car. The company famously won the 1978 Le Mans 24-hour race with the A442B, driven by Jean-Pierre Jaussaud and Didier Pironi. The No36 will test March 26 [tomorrow] and 27 at the first official ELMS practices in Paul Ricard, France to prepare for the season and June’s headline round-the-clock race. Team principal Philippe Sinualt says the No36 should be a capable presence in endurance racing’s highly competitive LMP2 class. Alpine also announced 34-year old Tristan Gommendy, former winner of French Formula 3, will drive the No36 alongside youngsters Nelson Panciatici and Pierre Ragues. The three drivers – all products of Renualt’s single-seater formulae – have a combined CV containing ten previous outings at the Le Mans 24 hours.