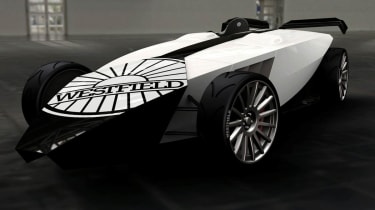 British sports car maker Westfield has confirmed further details of its first electric kit car. The iRacer is priced from £13,999, and the YouTube video below showcases the car’s intense acceleration and track-focused performance. It was purposefully designed by Westfield to be able to run a selection of different powertrains, including fully electric, hybrid and a conventional petrol engine. None of these are included in the kit, leaving the choice up to the buyer. One intriguing setup uses YASA-750 electric motors, powering the rear wheels with 132bhp and a more notable 550lb ft of torque. With the iRacer tipping the scales at 771kg, that means a limited top speed of 115mph and a 0-60 time below 5sec. The key to the iRacer’s sparky performance figures is its lightweight body, which is made of recycled plastic and aluminum. The batteries make its overall weight similar to a Lotus Elise's. The 23kWh battery has 25 minutes of charge at full track speed, but future battery technology – easily swapped into the iRacer’s body – should improve this range.