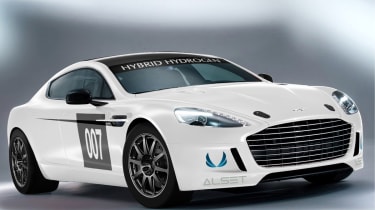 Aston Martin will race a hydrogen-powered car at the Nurburgring 24 hours in May. The Hybrid Hydrogen Rapide S will be putting the green in Green Hell with a planned race-pace lap with zero CO2 emissions – the first at the Nordschleife – before aiming to complete the Ring’s round-the-clock race. That would make it the first hydrogen car to lap an internationally sanctioned race. Alset Global is Aston Martin’s technology partner for the project, and has helped develop a twin-turbo version of the regular Rapide’s 5.9-litre V12 engine. There’s no word on tech specs yet, but some forced induction should see a rise over the standard 550bhp and 457lb ft of torque, the latter especially. ‘The use of the existing engine will showcase that engine downsizing or electrification is not the only way to achieve low emissions’ says Alset. We approve of that mentality. The engine can run on pure hydrogen, pure petrol or a mix of the two; the former will see it run with zero emissions for its record-setting qualifying lap, while Aston tells us it will run a mixture during the race, rather than settling just for petrol. How this effects the Rapides pace and, perhaps more pertinently in a 24-hour race, its reliability will be one of the more intriguing stories of the race. A total range of 250km is forecast running hydrogen-only, equating to around ten laps of the Nordschleife. Safety has been well thought through, of course; an accident involving a car full of hydrogen could be quite a grisly one. Four ‘ultra-strength’ carbonfibre tanks will hold a total of 3.2kg of hydrogen gas. Two are stored beside the driver, two in the boot (see diagram, right) and the system has been approved by the governing body of German motorsport. Aston Martin hasn’t confirmed the Hydrogen Rapide S’s driver line up, but it will likely run its regular pair of cars at the N24 with some of its usual driver line-up present: at this weekend’s VLN round, the Rapide is running in the ‘E1XP’ experimental class driven by company CEO Ulrich Bez and Wolfgang Schuhbauer, who’s part of Aston’s Nurburgring-based development team. A V8 Vantage is also racing under Aston Martin colours. The 2013 Nurburgring 24 hours take place on the weekend of May 19 to 20.