The Vencer Sarthe is an all-new Dutch supercar with Corvette V8 power, unveiled at Top Marques 2013 in Monaco 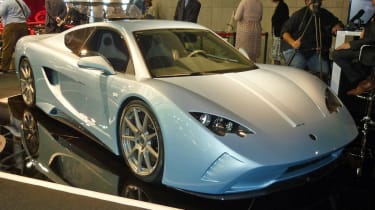 Vencer is a new Dutch supercar maker, and its Sarthe model has debuted at the 2013 Top Marques show in Monaco. Like many fledgling supercar projects, it draws its power from a trusted source – an LS3 General Motors V8 that puts in sturdy service in the Corvette C6. A 6.2-litre unit, here it produces 510bhp (at 6000rpm) and 480lb ft of torque (at 4700rpm), figures that compare nicely with the Corvette Z06 rather than the base ‘Vette the engine comes from. Carbon body panels help keep weight to a hot hatch-like 1390kg, endowing the mid-engine, rear-drive Sarthe with a 3.8sec 0-62 time and claimed 203mph top speed. The Sarthe has been over two years in the making, and lead project engineer Luuk Potze told evo that it’s not designed to grab headlines with its numbers. ‘We don’t want to break records. We want to make a niche, low-volume car. It’s a very good drivers’ car. It has to keep up with its rivals of course, but we aren’t interested in breaking Nurburgring lap records’. Evidence comes with the fitment of a six-speed manual gearbox. ‘We think a car like this should be manual’, proclaims Potze. He does acknowledge a sequential or automated manual option may lie in the future, however. ABS and ESP are standard.  Production will take place at Vencer’s Vriezenveen home, and the project has an air of local pride about it. Several components are from Dutch manufacturers, not least the tyres, which are the result of working with Netherlands-based Vredestein.  Annual production is predicted to total 10-15 units, priced from 265,000 euros plus tax (around £270,000). Sales are initially for the European market, though an expansion to Middle East and Russian territories – where demand for cars like this is proven – lies in the near future. A second model is also planned, with a design contest on Vencer’s website to help decide which direction it takes.