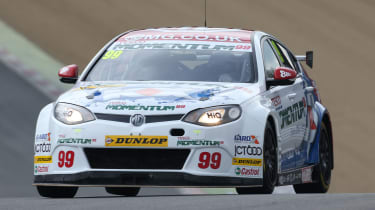 The second British Touring Cars event of 2013 takes place on the Donington Park National circuit this weekend, with Jason Plato (MG6) holding the early points lead heading to the Leicestershire circuit. Plato starred at Brands Hatch on Easter Sunday with two wins and a fifth place, but Donington historically isn’t his strongest circuit – he hasn’t won there since 2008, when he was still racing for the factory SEAT team. Also keep an eye out for his works team-mate Sam Tordoff, who impressed with fourth, fifth and third at Brands in what was only his second-ever BTCC meeting. Gordon Shedden (Honda Civic) endured a difficult weekend at Brands Hatch as he begun the defence of his title, but will fancy his chances of hitting the top step of the podium at Donington, a track where he won twice last year. Already 37 points behind Plato, it’s crucial for the Scot to keep pace in the championship table. Meanwhile, the Audi A4 of Rob Austin will return to the grid just three weeks after suffering extensive damage in a crash at Brands Hatch. His Wix Racing team has been selling special T-shirts to help raise money for repairs – more information is available at Rob Austin's website.