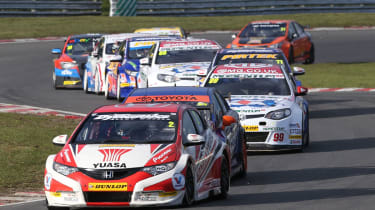 Jason Plato claimed two wins and a fifth place to lead the standings after the opening 2013 British Touring Cars meeting at Brands Hatch. The works MG6 driver survived a late assault from Andrew Jordan (Honda Civic) to win race one. Jordan lunged up the inside at the very last corner, sending both cars into the Clearways gravel, but both Plato and Jordan managed to crawl out and cross the line first and second. Rob Austin shot from seventh on the grid to lead by the end of the first lap in his rear-wheel-drive Audi A4, but eventually fell back to third as his ‘option’ soft tyres wore out. Plato won a much more straightforward race two from pole position, with Jordan again second. Reigning champion Gordon Shedden (Honda Civic) had climbed from 19th on the grid to third after his first race had been ruined by having to pit to remove grass from his radiator. But his Civic failed a post-race ride-height check and Shedden was duly disqualified, handing the last spot on the podium to veteran Civic driver Jeff Smith. Shedden's Honda teammate Matt Neal had struggled through the first two races, but made the most of the reverse-grid rule to win race three, Shedden completing a Honda one-two. Series newcomer Sam Tordoff (MG6) secured his first podium in third, although the race was marred by a huge crash for Austin that caused significant damage to his A4. After being clipped by a spinning Dave Newsham (Toyota Avensis), Austin was pitched backwards at speed into the tyre wall, ripping the front-left door from his car. The cash-strapped owner/driver now faces a race against time to repair his Wix Racing car in time for the next rounds at Donington Park on April 20/21. BTCC standings after 3/30 races1 Jason Plato (MG6) 51pts2 Andrew Jordan (Honda Civic) 453 Sam Tordoff (MG6) 404 Jeff Smith (Honda Civic) 355 Matt Neal (Honda Civic) 346 Adam Morgan (Toyota Avensis) 327 Colin Turkington (BMW 125i M Sport) 238 Frank Wrathall (Toyota Avensis) 189 Gordon Shedden (Honda Civic) 17= Rob Austin (Audi A4) 17