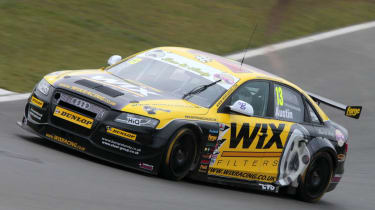 Continuing the countdown to the 2013 British Touring Cars season, evo catches up with Audi A4 racer, team boss and actor in the forthcoming Formula 1 film Rush, Rob Austin: How would you sum up your last 12 months?“Difficult! We’ve had issues with finances and with engine problems, so we really had to battle through last year and do what we could when we could. But we’ve got some massive updates on the car this year, and the sponsorship from Wix Filters means we can commit, complete the whole season and race at the front regularly.” What’s the biggest strength of the A4 compared to the other cars on the grid?“This year, for the first time, I reckon we’ll have good straight-line speed. With rear-wheel drive, sometimes it’s an advantage and sometimes it’s a disadvantage, but we’re hoping for some good power this year. The team’s been working some crazy hours to get the car ready and we think it’s a good improvement.” Which other driver in the field do you respect the most, and why?“I’d say Dan Welch, because he’s involved in developing his own Proton Gen-2 in a very similar way to what I’m doing with my Audi. Oh, and he bought me beer the other week.” Who do you think will win this year’s championship, and why?“Me, because I’m the most determined! The one thing I can guarantee is that I’m going to try harder than anyone else. It’s hard to say and it’s always hard to predict British Touring Cars, but I’d like to think that we’ll be in with a shout.”