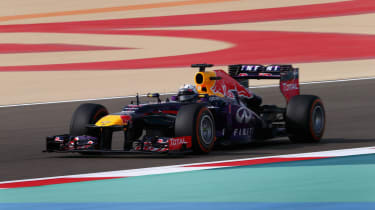 Sebastian Vettel extended his Formula 1 points lead to ten with victory in the Bahrain Grand Prix, comfortably beating the two Lotus machines of Kimi Raikkonen and Romain Grosjean, as the top three from last year’s race was repeated. Force India’s Paul di Resta came close to scoring his first F1 podium, taking fourth after being passed by Grosjean late on. Lewis Hamilton bagged fifth for Mercedes by passing Mark Webber on the last lap, while Jenson Button struggled to tenth in his recalcitrant McLaren.

Former F1 podium finisher Takuma Sato claimed his maiden IndyCar race win on the streets of Long Beach in California on Sunday. The Japanese ace held onto the lead for most of the race while the rest of the field behind was mired in a spate of crashes. evo columnist Dario Franchitti finished fourth, losing his initial lead through a slow pitstop.

Another ex-F1 driver, American Scott Speed, also enjoyed success at the weekend, winning the rallycross competition in the Brazilian X Games in the city of Foz do Iguacu. The rallycross newcomer beat the likes of Ken Block and Travis Pastrana, both of whom were eliminated from the final by a shunt.