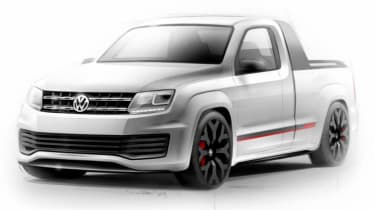 The Volkswagen group is taking the 2013 Worthersee tuning show very seriously. After VW revealed a 496bhp Golf GTI concept and SEAT unveiled its 326bhp Leon Cup Racer, the latest concept may not be as potent, but it’s no less interesting.

VW has given its Amarok pick-up an unlikely dose of attitude with a new R-style version. Practical elements – such as the Amarok’s plentiful ride height and simple interior – have been binned. The pick-up rides much lower than standard, while the alloy wheels are now a staggering 22in in size, calling on 60mm-wider bodywork to accommodate them. Other exterior flourishes include a carbonfibre diffuser, larger front air intakes and much bolder exhaust tailpipes.

Inside, the Amarok R-style gets a black, red and silver GTI-style interior, a pair of bucket seats and a carbonfibre-trimmed dashboard.

Under the skin, the R-style gets a 268bhp/442lb ft 3-litre V6 turbodiesel engine, which, mated to an eight-speed automatic gearbox, hustles the Amarok to 62mph in an almost hot hatch-like 7.9sec.

The VW Amarok R-style has only been seen in these sketches so far, but we’ll publish pictures as soon as we get them. And while its styling is pure concept car, the engine and transmission could feasibly make production, with the similarly powered V6 Nissan Navara Outlaw to rival. Currently, the most powerful Amarok uses a 178bhp 2-litre twin-turbo diesel.