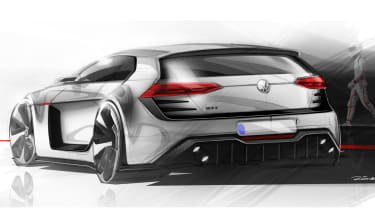 Volkswagen has released sketches of a new 496bhp extreme Golf GTI concept, ahead of the car’s unveiling at the Worthersee tuning show. The concept, dubbed ‘Design Vision GTI’, features a turbocharged V6 engine, four-wheel-drive and is based on the standard road car’s MQB platform.

Designed in-house by Volkswagen engineers and designers, much like the 2007 Golf W12 show car, the new Design Vision GTI is said to take the GTI to its extremities. The wide body panels house 20-inch alloy wheels and huge carbon-ceramic brakes, while retaining the key honeycomb grille and other hallmark GTI design touches.

Power is channeled to all four wheels via a DSG gearbox, and the Design Vision GTI will reportedly do the 0-62mph sprint in 3.9secs. The concept will also feature an onboard camera, which will capture and share and time laps of world circuits, confirming the car’s racing aspirations.

Inside the cabin, the driving position has been optimised for track use, with the minimum amount of buttons. The rear seats have gone, now housing a pair of crash helmets, and a strengthening cross brace.