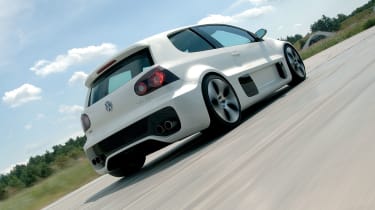 Golden rule of driving priceless, one-off concept cars such as the Golf GTI W12-650: don’t prat about. Misdemeanours will be frowned upon, chiefly because any damage is unlikely to be fixable outside of a specialist prototype maker, and at considerable expense. What’s more, being a concept, the suspension, steering and powertrain have been set up to do little more than get the car on and off a motor-show stand.

Yet this important information appears to have bypassed my driver. And a photographer has just asked him to ‘showboat’ for the camera, thereby blocking the neural pathways to common sense.

First pass around the corner gives understeer. Second pass, lift a little, twitch of the tail. Third pass, lift a lot, have massive spin, become engulfed in choking tyre smoke. Fourth pass: more circumspect, so back to understeer. Fifth pass: more speed, even bigger spin onto the grass, sliding sideways towards the lip of another section of concrete track. Phew. No flip. Nervous laughter. Sudden recall from my driver that this is one Golf GTI where the dents won’t just polish out.

Still, my man can be forgiven his indiscretion, as he isn’t alone in his infectious enthusiasm for this twin-turbo mid-engined two-seater. When we catch up with the madcap 641bhp rear-drive Golf on an ex-Eastern Bloc air force base near Berlin, Marc Lichte, the man responsible for the GTI W12’s exterior design, has barely said hello before exploding into a passionate description of his favourite design features (the ‘flying’ C-pillars come top, since you ask).

Lichte really, really wants Volkswagen to build this car. ‘It’s up to you guys to spread the word, help drum up demand, help persuade our management to make the W12,’ he insists in evangelical tones. ‘It would be comparatively easy to do because all the parts are off-the-shelf items from the Volkswagen group – it’s a Bentley engine with a Phaeton gearbox mounted on the back, Audi RS4 front brakes, Gallardo rear brakes and axle, and the platform is Golf.’

Lichte also believes that VW overlord Ferdinand Piëch is a fan of projects like this. The fact that the GTI W12 was built at all is evidence of a sort that Volkswagen still has an insanity gene in its corporate DNA. Particularly as this project was conceived not to capture column inches at a major international motor show, but to wow the crowds at an annual GTI festival in Wörthersee, Austria.

From 20 feet away the GTI W12 largely conceals its unlikely specification. Its silhouette, at least from the side, looks like that of a regular Golf and it shares the same wheelbase. And while it sits 70mm lower, rolls on 19in alloys, has gaping grilles front and rear and a couple of vents in the flanks, we’ve seen that sort of stuff before from the tuning industry. Even the carbonfibre roof doesn’t seem so unusual – until you get closer.

From inches rather than feet away, the amount of work that has gone into this car becomes clearer. Aft of the B-pillars, that carbonfibre roof dips downward and the rear windows pinch inward. This creates those flying C-pillars – which funnel air to radiators hidden behind them – and, as the pillars wrap over onto the roof, forms an aerodynamic spoiler.

Next you’ll be distracted by a large lump of alloy sitting where the rear seats should be, behind which are a pair of frisbee-sized cooling fans surrounded by carbonfibre. Although the 6-litre W12 motor is noted for its compact dimensions when under the bonnet of a Bentley (and, in normally aspirated 444bhp guise, in the nose of the VW Phaeton), its inclusion in the middle of a Golf, where it’s cradled in an aluminium subframe, has meant adding another 160mm to the width of the car. With all that power to accommodate, not to mention 553lb ft of torque, having a broader track is undoubtedly a good thing.

My turn. From the driver’s seat it’s mainly familiar Golf territory, but with a few little added extras thrown in. On top of the facia are dials for the turbos and the exhaust gas temperature, below them an array of toggle switches, the most important of which is for the plumbed-in fire extinguisher system, just in case those exhaust gases get so hot that engine-bay combustion of the accidental kind takes place.

Apart from the white leather upholstery and trimmings, the only other striking difference is the lever for the autobox – not even a DSG, it’s a Tiptronic system from the Phaeton, the only transmission up to handling the W12’s torque. As we soon discover, it’s the GTI W12’s weakest link, because while the changes are smooth, the shift strategy hasn’t been programmed for ‘spirited’ driving; it’s never in the right ratio through a sequence of corners and it often pops in a shift midway through a bend.

From outside the GTI W12 sounds like a big, ballsy powerboat as it passes, deep and woofly. Inside you lose some of the burbling resonance from the quad tailpipes, but the bassy growling and the sense of latent strength punch through the bulkhead and soundproofing. The other sound you have to get used to is that of the cooling fans, working overtime to remove the heat from the enclosed bay.

A long runway offers the chance to sample the performance. Off the line it’s quick, but not extraordinary. In part that’s down to the fact that the engine is artificially reined-in to around 60 per cent of its full potential in the first two gears. But as the gearbox slides in ratio number three, the gale becomes a tornado, this hatchback-shaped projectile assuming supercar pace. The tacho is redlined at 7500rpm and the engine is happy to slam into it, but what’s particularly impressive is how, at around 5500rpm, the W12 gets a second wind.

Top speed is quoted as 201.8mph, but we only have space to spool it up to 145mph. Still, it’s hard to be disappointed when you remember that this is an undeveloped, one-off show car. Just how ‘undeveloped’ becomes sphincter-tighteningly apparent as I brake hard at the end of the runway – the Vee-Dub twitches left abruptly, threatening to spin and prompting a swift retreat of foot from brake pedal.

The first proper corner also reveals that there’s a lot of set-up work still to be done. As you turn in, the previously lifeless steering puts on some weight and starts to feed back some information. But what it’s telling you – and this is backed up by feedback from the seat of your pants – is that the tail is swinging around at a surprisingly rapid pace. Gently backing off restores the equilibrium. Give it another go. Again the onset of oversteer is sudden and the rear’s breaking point unpredictable. A spin teaches you that if you wait for the tail to go of its own volition, you won’t catch it.

You simply have to keep on playing – like my friendly VW test driver did – to find the right cornering formula. Make the nose nibble into the bend; rather than steer smoothly, lift off sharply; work out when best to reapply the power. Then, once in a dozen times if you’re lucky, you won’t spin, you won’t have the front end simply ploughing on, and you will be able to hold a tyre-smoking, showboating powerslide.

Let’s hope that Lichte’s dream of making the GTI W12 a production reality comes true, because it would be great to drive this car with the wrinkles ironed out. Meanwhile, all credit to Volkswagen for having the wit to sanction it in the first place, then having the balls to let people go nuts in it.