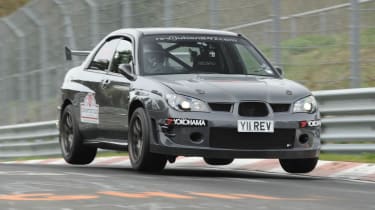 A bespoke British-built Impreza has broken a Nordschleife lap record. The Project STI Nurburgring (driven here) is the work of Revolution in Gateshead, and was designed to become the fastest Subaru round the Green Hell. That happened on April 30, and you can see the video below. The first (and so far only) Project STI lapped the Ring in 7m53.08s, taking two seconds from Tommi Makinen’s 2010 time in a lightly modified WRX STI.

The driver was Fredy Lienhard, the racer turned Ring instructor who is reckoned to have topped 10,000 laps of the German track, and had picked up a VLN class win three days earlier in a Mazda MX-5.

Unlike Makinen’s record, the track was not closed off, Revolution instead seeking clear spells during a high-level trackday. And disaster was averted when a boost leak was sourced and fixed in the middle of the day.

The car was driven from the tuner’s north-east home to the Nurburgring and back, and Lienhard requested a switch from its road rims to 17in wheels for the added compliance of taller tyre sidewalls. Revolution MD Glenn Campbell reckons there’s another ten seconds to be knocked off the Project STI’s time with tweaked suspension settings. ‘Maybe someone else will go out and set a faster time but we’re happy; we don’t want any damage or anyone getting hurt. But if we hadn’t passed Tommi’s time we’d still be there trying!’ he told evo. Revolution plans to build ten Project STI Nurburgrings, the 508bhp two-door Impreza costing £71,994.