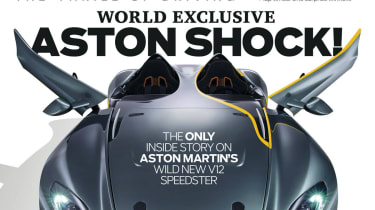 Buy a copy of evo 184 in our online shop

First drivesPorsche 918 Spyder, BMW M6 Gran Coupe, Porsche Cayenne Turbo S, Lotus Evora Sports Racer, 2013 Nissan GT-R, Maserati Quattroporte V6, SEAT Leon FR TDI and a special edition Aston Martin Vanquish reviewed and rated ColumnsEver wanted to know what it’s like to drive an oval at over 200mph? No one is better placed to divulge than Dario Franchitti LettersRatios and their methods of being swapped are what have been driving you to put quill to parchment this month

Aston Martin CC100The most exciting thing most people get when they reach 100 is a card from the Queen. With all due respect, we think Aston’s present to itself - a wild speedster concept - is rather better Hot hatch group testNew Renaultsport Clio Turbo faces Peugeot 208 GTI, Mini JCW, Ford Fiesta ST and Nissan Juke Nismo in mid-Wales. With more three-wheeling cars than the Morgan factory Talbot Sunbeam LotusThe original rear-wheel-drive hot hatch and also the only Talbot we’re ever likely to feature in evo

Dean StonemanIf Stoneman’s racing comeback was a film script, you’d think it was more saccharine and far-fetched than a Haribo factory on Pluto. But remarkably, it’s all real

Lamborghini road tripWe drive an Aventador Roadster and a familiar Countach all the way to Italy. On days like these…

Lambo 50th Anniversary TourLamborghini may only be half the age of Aston, but 50 years is still a good excuse for a knees-up (or a mambo Lambo jambo, if you will) Ring VirginNick Trott had never been to the Nurburgring. A BMW M3 and a two-day course helps explain to him what all the fuss is about

Long-term testsEditor Trott would be weeping about the loss of his Mercedes C63 AMG Coupe had it not been replaced by a McLaren MP4-12C evo knowledgeWe tell you how to buy a Mercedes SLK55 AMG and then reveal the best road in Austria on which to drive it Art of SpeedIn the same month we drive the new Porsche 918, we look back at the stories behind the wooden gearknobs in the 917 and the Carrera GT Buy a copy of evo 184 in our online shop