Group B rally cars were some of the most wild and exciting cars ever produced. Here's a gallery of some of the best, in both road and fire-spitting rally trim. 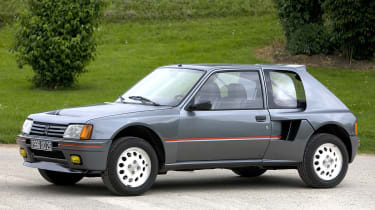 Group B re-ignited the World Rally Championship when it was introduced in 1982, opening up the sport to a new generation of pure-bred racers - requiring tiny numbers of road car production to be eligible. Costs and power figures quickly spiralled, but with interest in the sport at an all-time high, beating the competition held huge rewards for the manufacturers.

A string of tragic deaths in the sport saw Group B banned in 1987. Here are just some of the iconic cars that were born from the series, including the Peugeot 205 T16, Metro 6R4 and Ford Escort RS200.