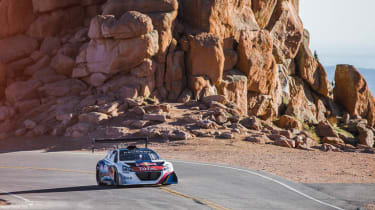 Peugeot has released the first video of its 208 T16 tackling Colorado’s iconic Pikes Peak hill climb for which it was designed. Adrenaline inducing on-board cameras, a la Climb Dance, and Group B-style turbo sounds make this the most enthralling 208 T16 video yet.

Whilst still being shaken down during official practice, the car shows promise at the hands of rally master Sebastien Loeb, posting the fastest time in each session. Loeb also offers his words of wisdom on the treacherous course. ‘It’s quite deep on the sides in some places, so it’s better to stay on the road.’ He also claims he is already ‘quite on the limit… everywhere,’ which confirms the car is well setup for the 12.42 mile ascent.

The 208 T16 is built specifically for Pikes Peak, with a 3.2-litre twin-turbo V6 producing 875bhp (at sea level), more than a modern Formula 1 car. It will sprint to 62mph in just 1.8sec, and reach its top speed of 149mph in a barely-believable 7.0sec thanks to an 875kg kerb weight. For more info, you can read the full tech story here.