Martini racers to be featured at Goodwood

A collection of 14 Martini Racing cars will feature at the 2013 Goodwood FoS, for the 45th anniversary of the famous livery. 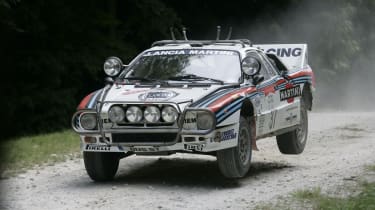 Martini Racing will celebrate 45 years in style at Goodwood this year, by showcasing a selection of iconic Martini liveried racing cars.

Martini is planning to take ten cars, and a further four will be on site. Legendary cars such as the five time WRC winning Lancia Delta Integrale, the Group B Lancia Delta S4, Porsche 917K, Ford Focus WRC, Lancia 037, Porsche 935 ‘Moby Dick’, and historic F1 cars like the Lotus 80 and Brabham BT45 will appear.

On top of this, the 911 GT3 Cup car, as driven by nine-time World Rally Championship winner Sébastien Loeb in this season’s Porsche Supercup, will be on public display for the very first time.

The 2013 Goodwood Festival of Speed will take place on the 12th-14th of July. Read a full event preview, and watch the evo video diary here.