evo's video preview of the 2013 Goodwood Festival of Speed, which stars Lamborghini and the Porsche 911 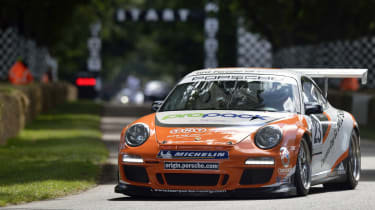 The Porsche 911 celebrates its 50th anniversary in 2013 and will be taking centre stage at the Goodwood Festival of Speed.  Goodwood has its own anniversary to celebrate, too, because this will be the 20th time Lord March has gathered together the very best cars and drivers from the automotive world and persuaded them to charge up his private drive alongside his country residence, Goodwood House.  evo attended the preview event this week where Lord March confirmed he intends to make this year the best ever Festival, boasting the very best attractions from the last twenty years. There will be at least seven Formula 1 teams including Ferrari, McLaren, Lotus and Red Bull, with others expected to confirm over the coming weeks. This year’s Michelin-sponsored Supercar Paddock will be bigger than ever too, with 43 displays confirmed so far. The McLaren P1 will be making its world dynamic debut and while Ferrari has yet to confirm if the LaFerrari will be there, we’d love to see both in action. Other celebrations include the 50th birthdays of McLaren Racing and Lamborghini, the latter organising a display of the its most exciting models next to the Supercar Paddock. It’s also 90 years of Le Mans, 60 years of the Sports Car World Championship and 40 years of the World Rally Championship and you can expect plenty of action from the very best cars representing all these formulas. Finally, this year’s Cartier Style et Luxe Concours will bring together the ‘greatest car designs of all time’, while just next to the Supercar Paddock, there'll be cooking demonstrations from world-renowned Michelin star-quality chefs. So you now know where you’ll find the evo team throughout Goodwood weekend! The 2013 Goodwood Festival of Speed runs from July 12 to 14, later than usual to avoid a clash with the German Grand Prix, while the moving motor show – which allows you to test drive cars – is on Thursday July 11.