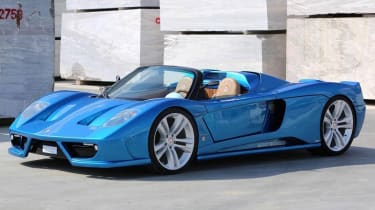 Montecarlo Automobile is to celebrate its 30th anniversary with a new supercar, the Rascasse.

Named after the famous final corner of the Monaco street circuit, the Rascasse develops 500bhp from its BMW sourced 5.4-litre V12. Its mid-mounted engine is able to run on petrol or hydrogen-enriched LPG. Italian LPG specialist BRC helped develop the dual-fuel capable engine.

The engine was first used in the 1998 Rolls-Royce Silver Seraph. The Rascasse boasts 170bhp more, suggesting considerable modifications, though no details of these are currently available.

The car - which has shades of Ferrari Enzo in its styling - will have a limited production run of 15 cars priced from 500,000 euros (around £420,000). The heavily wood-trimmed interior is said to be inspired by yachts.