As the 2013 Formula 1 season heads for its midway point, we look at who's leading and who's suffering 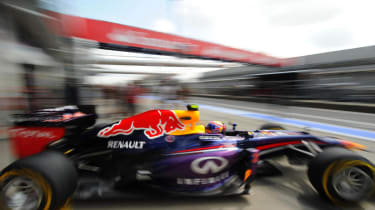 Sebastian Vettel produced an inspiring win on his home turf to fend off the Lotuses of Kimi Raikkonen and Romain Grosjean in the German Grand Prix. The three-time world champion placed his stamp on victory very early on by passing the pole-sitter Lewis Hamilton at the first corner, with team-mate Mark Webber following suit. Webber sustained a challenge to Vettel from second until his first pit stop, in which a faulty wheelgun caused the right rear tyre to fly off and strike FOM cameraman Paul Allen, who suffered a broken shoulder and cracked ribs. He was subsequently taken to Koblenz Hospital, where he is currently under observation. Webber recovered with a sterling drive to go from twenty-first to seventh by the chequered flag. The Lotuses of Kimi Raikkonen and Romain Grosjean maintained pressure on the lead throughout the race, both producing strong drives to lock out the podium from Vettel. This race seemed to send out an ominous message to the front-running few, as Vettel stormed away with his fourth victory in nine races – a statistic no other driver can hold a candle to. Whilst the positions of the leaders seem to change every meeting, Vettel and Red Bull are always in the centre frame; he hasn’t finished lower than fourth throughout the season, save for the British GP when he suffered a retirement.  Driver and team are doing a fantastic job, and have opened up a daunting lead of 67 points in the constructors’ championship, not to mention the 34-point lead enjoyed by Vettel in the drivers’ standings. So far Red Bull looks pretty handy for a fourth double-championship in a row. Lotus seems to have picked up where it left off towards the beginning of the season. Its pace was undeniably hindered halfway through, with both Raikkonen and Grosjean pointing the finger at the safety car for not securing the top step. It wasn’t hard to notice this during the race, seeing Grosjean’s immense speed early on and the rate at which Raikkonen was catching Vettel towards the end. This performance may have been a one-off, but people can’t forget the fact that Pirelli has altered the rear tyres to make them stronger. Lotus has been able to manage its tyres fantastically well this year, so is one to watch in the coming races.  Conversely, Mercedes desperately needs to improve its race pace. Despite participating in a somewhat controversial tyre test in the run-up to Montreal, high rear tyre wear is still inhibiting its ability to stick the car on the podium. This fact is even more heartbreaking when you look at its pace in qualifying, when not even Vettel in a Red Bull can touch the German team. Rosberg has got half a monkey off his back by securing wins at arguably the two most prestigious venues, Silverstone and Monaco, but Hamilton has yet to fully silence the sceptics who questioned his move from McLaren. Will he get that first win soon? Not if his Pirellis have anything to say about it.