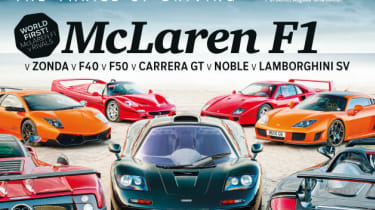 Buy a copy of evo 186 in our online shop

News The Bugatti Veyron and the Audi Quattro are this month’s comeback kids, while there’s also a BTCC mid-season updateFirst drivesNissan 370Z, Maserati Ghibli, Kia Proceed GT, Porsche Panamera 4S and a host of other new cars get the evo once-over ColumnsMetcalfe’s not happy about carmakers’ sales strategies, while Porter gets on their case about nods towards history LettersHarry’s column on carbonfibre bling had you nodding in agreement this month

Analogue supercarsWe celebrate the best drivers’ supercars ever made with one of our most star-studded group tests ever: F40, F50, Murciélago SV, Zonda F, M600, Carrera GT and F1… Jaguar C-X75 drivenIt’s the car that could have challenged the P1 and LaFerrari… until Jaguar pulled it from production late last year. Richard Meaden gets behind the wheel of the C-X75 hybrid prototypeLord Drayson’s electric dreamMeet the former government minister turned land speed record-breaker who is hard at work bringing electric technology into motorsport£50K Roadster group testLotus’s new Exige Roadster is put to the test against the three biggest rivals in its class: the basic F-type V6, the Porsche Boxster S and the Mercedes SLK55 AMGRally car on the roadCan the undoubted king of the stage be king of the road as well? Henry (who else?) tries the brand-new Ford Fiesta R5, part of the bright new future for international rallyingA45 AMG v M135iMerc’s new giant-slayer has 355bhp and four-wheel drive – but can it knock the BMW off its premium hatch perch?

evo knowledgeDerided when new, the Mitsubishi Evo X is becoming a hidden gem. Find out how to go about buying one Art of SpeedThe TVR Sagaris spoiler that a Ferrari F1 boffin pooh-poohed

Buy a copy of evo 186 in our online shop