Hennessey has tuned the 2013 SRT Viper to produce more than 700bhp. Specs, pictures and video here 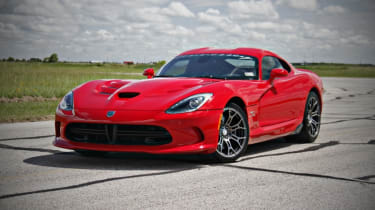 Power and torque from the 8.4-litre V10 is up to 705bhp and 695lb ft from the standard 640bhp and 600lb ft. This boost comes courtesy of some high-flow cylinder heads, stainless steel long-tube headers and a further re-engineered exhaust and free-flowing air filter.

Performance is understandably explosive, with 0-60mph arriving in 3.1secs and a claimed top speed of 216mph. Hennessey has also tested the 700R over a standing quarter-mile, running a time of 10.7secs at 134mph.

If this isn’t quite enough, Hennessey also offers a twin-turbo model called the 1000R, which pushes power to 1120bhp. The old Hennessey twin-turbo Viper with a similar power output was capable of a Veyron-beating 0-200mph time of 20.3secs.