evo's there to witness the Hennessey Venom GT prove itself as one of the world's fastest cars. Video action here 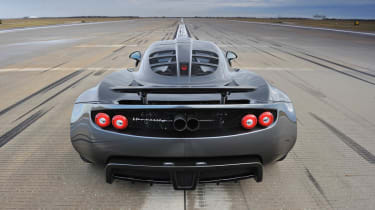 The Hennessey Venom GT has already sparked lots of debate, yet until now it's barely turned a wheel in public. The 1244bhp, twin-turbo V8 supercar is about to establish itself as one of the world's fastest cars, however. A Texan runway has seen it produce some very, very quick 0-60, 0-100 and 1/4 mile numbers as well as officially breaking one accelerative benchmark record.

You can see the record run on video below, and read the full story in the latest, March 2013 issue of evo, on sale now.

Can it compete with Bugatti Veyrons, Pagani Huayras and Aston Martin One-77s dynamically? We'll have a video review of the Venom next week.