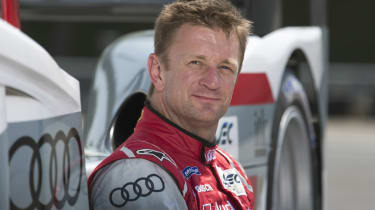 The Scotsman, who turns 44 later this month, has called time on a glittering career in which he firmly established himself as one of the most prolific and successful drivers in sportscar racing history. After winning the WEC with Audi this year, McNish says he’s chosen now to step back from top-line driving as he feels he has nothing left to achieve: ‘I can look back on a fantastic career that has left no aims unfinished and I’m looking forward to new challenges the future holds for me. Now I’ll have a lot more time for my family. But I’m going to continue to be part of motorsport in various roles, albeit no longer as an Audi race driver.’ After his promising single-seater career stalled at Formula 3000 (now GP2) level, he switched to sportscar racing in 1996 as part of Porsche’s new factory effort with the 911 GT1. This partnership yielded his first Le Mans win in 1998, alongside Laurent Aïello and Stéphane Ortelli, and after unsuccessfully racing the Toyota GT-One the following year, he was reunited with Aïello and Ortelli in 2000 in the new Audi R8 prototype and took second at Le Mans. Along with an American Le Mans Series title win with Dindo Capello, it formed the start of an association with Audi that would last for most of the rest of his career. In 2001, he got his F1 break, helping Toyota develop its first car ready for its entrance into Grand Prix racing in 2002. He was given a race drive for that first season, but failed to score any points, and after spending 2003 as test driver for Renault, he returned to sportscars with Audi in 2004. He has been a mainstay of Audi’s factory effort since, even racing one season of DTM in 2005. More ALMS titles followed in 2006 and 2007, but luck eluded him at Le Mans until he finally bagged his second 24 Hours crown in 2008 with Capello and Tom Kristensen. In recent years McNish has played a key role in helping Audi develop first diesel and then hybrid technology for its Le Mans racers, and has been a major force in the new World Endurance Championship that kicked off in 2012. In 16 races over two seasons, McNish has scored 15 podium finishes, and three wins in this year’s series (including a third success at Le Mans) secured him the world title alongside Kristensen and Loïc Duval.