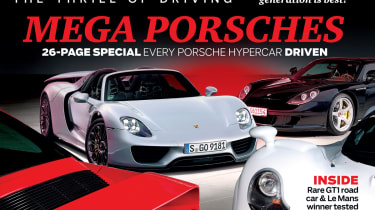 Buy a copy of evo 192 in our online shop

ColumnsRichard Meaden is worried about his Sunday afternoons, while Porter likes the new Mini in spite of the marketing. Dario’s back, too LettersIn our new feature, Talking Point, we ask whether the new GT-R Nismo is worth the extra money over the standard car. You give us the answer

Porsche 918 SpyderThe waiting is finally over as we get to try the production version of Porsche’s hybrid supercar on road and track Porsche 959 Sport & Carrera GTHenry Catchpole ponders what connects these two iconic Porsche supercars (the answer’s just below, as it happens…)

Forza 5 v Real LifeIs there any need to go to a trackday or is it just as much fun to sit at home on the Xbox?

Long-term testsTwo Celicas this month: Matthew Hayward introduces his GT-Four and Henry recalls a Castrol-liveried one

evo knowledgeEver fancied a Suzuki Swift Sport? If so, we tell you what to look for

Buy a copy of evo 192 in our online shop