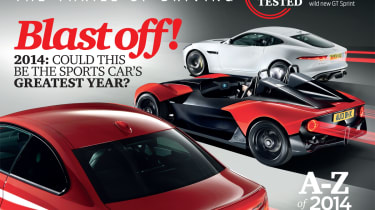 Buy a copy of evo 193 in our online shop

ColumnsDickie pines for some motorsport-inspired road car specials, while Porter’s dog makes another less-than-welcome appearance LettersThe debate about the McLaren P1 rumbles on, while our forum users dissect the new Corvette

A-to-Z of 2014Everything there is to look forward to in performance motoring this  year, helpfully alphabetised

BMW M235iHenry Catchpole heads to Las Vegas to get his hands on the new bargain Beemer that offers 322bhp for less than £35,000 Jaguar F-type CoupeThe latest iteration of the F-type brings even more power and a solid roof. Duff drives a prototype near Barcelona

Zenos E10We get an exclusive insight into the preparation of the new British two-seater sports car, featuring against-the-clock scenes reminiscent of Challenge Anneka

Art of speedNothing could be more ’80s than Testarossa side strakes (except a Level 42 album, perhaps)

Buy a copy of evo 193 in our online shop