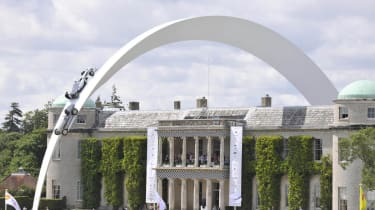 The 2014 running of the Goodwood Festival of Speed once again attracted an all-star line-up of top level drivers and car manufacturers, eager to demonstrate their exotic machinery in front of a 150,000 strong crowd. Sebastien Loeb stole the limelight on the fourth and final day, racing his Pikes Peak winning Peugeot 208 T16 up Lord March’s famous hill to grab the fastest time of the weekend.

Loeb only managed to set the second fastest time in Saturday’s qualifying, but saved the best till last with a timesheet topping 44.60sec sprint on Sunday, beating former GT1 World Champion and ex-grand prix driver Michael Bartels in his Maserati MC12 ‘Goodwood Cent 100’ by 1.22sec - cementing the 208 T16 as the fourth fastest car ever at the world famous event. It does mean Loeb hasn’t clinched the all-time Goodwood hill record though, being some three seconds off the pace of Nick Heidfeld’s time in a McLaren MP4-13 F1 car. Loeb had played down his chances prior to Sunday, blaming the 208’s short gearing.

Joining the French rally legend on the course were a host of other world class drivers, including Formula 1 stars Jenson Button, Lewis Hamilton, Kimi Raikkonen and Sir Stirling Moss, as well as a selection of two-wheel icons including Bradley Smith and John McGuinness. Even our very own Henry Catchpole was lucky enough to join in on the action, piloting the 1998 Le Mans winning Porsche 911 GT1 and Chassis Number 1 Jaguar D-type up the hill over the weekend.

Whilst some drivers thrashed their iconic vehicles up the hill with average speeds in excess of 100mph, some chose to instead burn rubber with donuts and plenty of sideways action to entertain the sell-out crowd. Spectators were also lucky enough to see some of the world’s fastest supercars and hypercars sprint up the hill, including two examples of the Ferrari LaFerrari plus a McLaren P1, Porsche 918 Spyder and Koenigsegg One:1.

An unlucky few of those chasing quick times fell victim to the tricky hill climb course, smashing their rare machinery into surrounding hay bales and out of contention. Six-time Olympic cycling champion Chris Hoy ploughed one of only two Nissan GT-R Nismos in the UK through all five Molecomb corner bales on Saturday, luckily escaping unharmed but unsurprisingly suffering dented pride after his first big shunt since entering the world of motorsport.

Others to end their weekend with hefty shunts included touring car and GT racer Anthony Reid, who smashed the front-left of an Aston Martin Vantage touring car into the intimidating Flint Wall corner, whilst Max Smith-Hilliard lost control of his 1972 Surtees-Cosworth on the approach to Molecomb.

Weekend winner Loeb also jumped back into one of his title-winning Citroen DS3 WRCs on the Skoda Forest Rally Stage, whilst recent F1 pole-sitter Felipe Massa brought the classic V10 F1 soundtrack back to the Chichester countryside in Damon Hill’s 1996 Championship-winning Williams FW18.

The 22nd running of Lord March’s Festival of Speed undeniably succeeded in bringing fans closer than ever to their racing heroes; Goodwood’s next major motorsport event will be at the Goodwood Revival, running September 12-14.