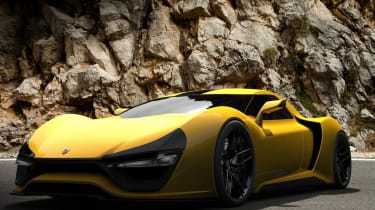 The Trion Supercars Nemesis is a new American hypercar, which if it makes it to production, will have more power and performance than the McLaren P1, on which the styling arguably takes some of its inspiration.

Boasting more than 2000bhp, the Nemesis will be powered by a twin-turbo V8 engine. If the car makes it to production, the hypercar will produce more power than the Koenigsegg One:1 and Bugatti Veyron Supersport, as well as the current fastest production car, Hennessey’s 270mphVenom GT.

Performance claims from the Californian company are equally wild, with 0-60mph coming up in 2.8secs and a claimed top speed of 270+mph – clearly gunning for the Hennessey’s recently achieved record.

The Nemesis will have switchable modes too, just like the P1. Activating ‘Predator mode’ changes the car’s suspension height, exhaust and rev-limiter, as well as the colour of the interior illumination.

Other details we know include the car’s use of lightweight carbon fibre for the body and chassis, as well as an eight-speed sequential transmission feeding the rear wheels. Trion Supercars also says that the Nemesis can accommodate taller drivers, as well as offer enough stowage for a set of golf clubs.