The Genty Akylone is the latest entrant in the hypercar market, a French supercar with a 220mph top speed. Watch out McLaren and Ferrari? 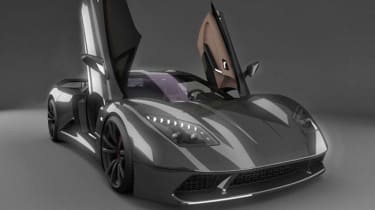 Genty Automobile, a small supercar company based in central France, is hoping to take on the likes of Ferrari and McLaren with its Akylone hypercar. Aiming to become ‘the new reference for road and racetrack performance’, the Akylone is claimed to sprint from 0-62 in 2.7sec and onto a top speed of 220mph.

Still in early development stages, the ambitious hypercar is said to produce over 1200bhp when its mid-mounted 6-litre twin-turbocharged V8 reaches 7300rpm. With a six-speed paddle-shift sequential ‘box pushing power through the rear-wheels, carbon-ceramic disc brakes and a monobloc chassis, the Akylone could certainly posses all the right ingredients to take the fight to the big boys.

It’s when we consider the claims of a 2.5sec advantage to 186mph over the McLaren P1 that things seem less realistic (Genty reckons its Akylone is good to reach the mark in just 14sec). But whether or not these figures – which appear to have only been tested in simulation – are accurate or not, there’s no doubt that the Akylone looks far more purposeful than some recent supercar start-up attempts. This is emphasised with an aggressive exterior boasting carbonfibre trim, a long, sleek rear roofline and a clutter-free interior; a far cry from the world of parts-bins and over-complicated interiors often seen with new car companies.

With a kerb weight of just 1102kg and a claimed drag co-efficient of 0.35, if the Akylone were to be put into production we’re sure it would be a serious piece of kit. Unfortunately six years into existence however, it looks as though Genty is still trying to source serious funding to create the car. A solid list of partners including Michelin and 9ff Engineering (famous for highly tuned Porsches) suggests intentions are serious. But as with most other automotive start-ups, securing funding will be pivotal if the Akylone is to ever be put into production. We for one hope it is, ambitious performance figures included. There’s nothing we like more than a performance car underdog.

Promo video of the Genty Akylone: