Audi stole a one-two finish with its dominant R18 e-tron quattro LMP1 at this weekend’s Le Mans 24 Hours, combating an early charge from Toyota and Porsche to take its 13th win at the legendary endurance race. 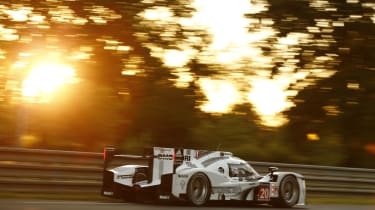 Before a wheel had even turned in anger, the 82nd running of the Le Mans 24 Hours was pipped as being one of the best ever. Porsche was to return to the front of the field for the first time in 16 years with its innovative 919 Hybrid LMP1 racer, to take on the might of Toyota and ever dominant Volkswagen Group stable mate, Audi.

Behind them, one of the most competitive GT fields, packed with Ferraris, Porsches, Corvettes and Aston Martins, were joined by futuristic racers such as Nissan’s unconventionally shaped ZEOD RC racer. And driving this diverse range of cars were some of the world’s very best racing drivers, including recent Red Bull F1 retiree Mark Webber, F1 hopeful Sam Bird and nine times Le Mans winner Tom Kristensen.

Despite Audi having had won 12 of the last 14 Le Mans races, nobody could have predicted that the now iconic endurance racing marque was to steal a 13th win this year. With Toyota having grabbed pole ahead of Porsche, the race was quite literally anyone’s as the clock approach 1500 hours on Saturday 14 June at a sunny Le Mans. As Fernando Alonso waved the tricolour flag on the start line, it was clear to see the results at the sharp end of the field were far from decided.

Action commenced almost immediately, with hybrid prototypes battling it out at the front, the drivers showing no signs of nursing their cars through the 24 hours and instead suggesting this was going to be a daylong sprint race. The first casualty of the LMP1 group came in the form of the number 14 Porsche 919 Hybrid, which fell back from the leaders with a fuel system problem requiring a costly trip to the pits.

Just two hours in and a rain shower caused early LMGTE Am leaders, AF Corse, to crash out with driver Sam Bird unable to see a group of slow moving cars ahead on a spray covered Mulsanne Straight. That saw the recent GP2 racer smash his Ferrari 458 Italia GT2 into the back of the number 3 Audi of Marco Bonanomi, forcing both cars into instant retirement and removing one of the main contenders for the overall win from the race.

The Audi wasn’t the only LMP1 car involved however, because Toyota’s Nicolas Lapierre also slid his way through that pack, smashing into the wall but managing to crawl back to the pits for repairs during the resulting safety car period. His teammate, ex-F1 driver Alex Wurz, was able to maintain his lead through the changing weather conditions, the car that started on pole confirming Toyota were a serious contender to break Audi’s string of Le Mans wins.

As night fell on the Circuit de la Sarthe the number 14 Porsche once again suffered the same fuel system problem, requiring the 919 Hybrid to make its second trip to the pits for repairs. But the biggest shock of the dark came 15 hours into the race when the leading Toyota, driven by ex Williams F1 racer Kazuki Nakajima, fell foul to a wiring loom issue and had to retire at the track side.

The number 2 Audi also had its fair share of problems, a recurring turbo issue requiring several visits to the pits for repairs. But action wasn’t restricted to the LMP1 class however, because the number 97 Aston Martin V8 Vantage GTE took charge to the leading number 51 Ferrari 458 for GT honours as sun rose on Sunday.

Hopes for Tom Kristensen’s tenth Le Mans win were dashed when his number 1 car faced the same problems the number 2 had. This required a lengthy repair in the pits, allowing the number 20 Porsche, piloted by Mark Webber, to take the lead and what looked to be the biggest surprise of the weekend. Early hopes of a Porsche win were lost however, when an engine issue caused the leading 919 Hybrid to retire from the race indefinitely, gifting the number 2 Audi the lead.

The number 2 car – piloted by André Lotterer, Marcel Fässler and Benoît Tréluyer – managed to hold onto the lead with a dominant final stint to grab Audi’s 13th Le Mans win, bringing the German marque to within three wins of record holders Porsche. Following the winning car across the line was the number 1 Audi and the number 8 Toyota.

Taking the LMP2 win was Jota Sport with its Nissan powered Zytek, whilst AF Corse stole the LMGTE Pro win in the number 51 Ferrari 458 Italia GT2. Aston Martin Racing was unable to stick with the Pro winners, but did come home with a win in the LMGTE Am class.

That brought one of the most unpredictable Le Mans races in history to a close, leaving both racers and fans excited to next year when the increasingly close LMP1 class is joined by Nissan and Lotus. No doubt Porsche and Toyota will work hard all year to fix their reliability issues ahead of next year’s race, but it’ll take more than small improvements to write off 13 times winners, Audi.