Volkswagen has shown the new Passat in saloon and estate form, ahead of the model's launch at the Paris motor show later in the year 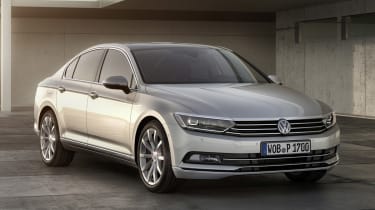 Volkswagen has pulled the covers on its new Passat at its Design Centre in Potsdam, Germany. Featuring technology to improve efficiency and modern design to match, the eighth generation Passat is will be the first in the family to feature a plug-in hybrid engine option.

Sitting 14mm lower and 12mm wider and flaunting a steeply angled bonnet and windscreen, the new Passat is far sleeker than the car it replaces. In an effort to give the car a more premium feel, designers also added sharp, yet discreet creases and headlights that flow out from the grille. The Passat boasts shorter overhangs, thanks to a 2mm shorter length at 4767mm, with a 79mm longer wheelbase.

Inside, the interior very much continues with that ethos, bringing added levels of comfort and practicality to the Passat. An optional 12.3-inch active Info screen incorporates a head-up display, 360-degree exterior camera, infotainment system and the Car-Net remote app, replacing the usual wealth of buttons to keep the dash smooth and clean. The car can also park itself with Volkswagen’s Park Assist technology, that technology even helping out when reversing with a trailer.

As to be expected the new Passat has received a raft of safety improvements. These include a system to alert the driver of unsighted vehicles arriving from the side and rear, as well as a radar braking system called City Emergency Braking that activates to avoid impacts in traffic. Technology to maximise visibility without dazzling oncoming drivers is also available for cars fitted with optional LED headlights.

Volkswagen claims that because literally everything in the car is new, substantial improvements to efficiency have been created compared with the previous generation. The weight for example, has been reduced by 85kg, whilst fuel economy has been improved by up to 20 per cent thanks to the option of the plug-in hybrid. Volkswagen claims the hybrid can travel up to 600 miles to one tank, and even up to 31 miles under battery power alone.

The most powerful engine offered with the Passat will be a twin-turbo 2-litre diesel, producing 236bhp and a substantial 369lb ft of torque from just 1,750rpm. For this engine power will be sent through a seven-speed DSG ‘box to all four wheels via Volkwagen’s 4MOTION system.

The new Passat and its UK pricing will be unveiled to the public at the Paris Motor Show in October, with UK sales commencing before the close of 2014. Deliveries are expected early in 2015.