The Exagon Furtive eGT is an electric GT car from France. Details and pictures here 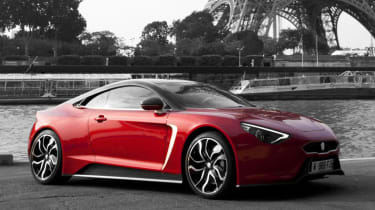 Exagon Motors has revealed more details of its electric GT car. It says the Furtive eGT marks a return to the French ‘haute couture automobile’.

Sitting inside an aluminium subframe and attached to the eGT's 124kg carbonfibre monocoque structure, two 148 kW Siemens electric motors provide the coupe's power. Combined output tops 402bhp at typically high motor speeds - between 5000 and 10,000rpm. Each motor is liquid cooled and together they send power through a Zero Torque Interruption three-speed gearbox.

Like all electric vehicles, top-end power is only half the story - the eGT's 380lb ft of torque is developed from rest and continues all the way to 5000 rpm. The upshot is a 3.5-second 0-60 time, while top speed is limited - presumably to preserve range - to 155mph.

The car's 53kWh battery pack is manufacturer by French industrial battery supplier SAFT, and Exagon guarantees at least 80 per cent capacity after 3000 cycles, or ten years. No range figure is provided but at roughly twice the capacity of a Nissan Leaf, a real-world figure of around 200 miles seems likely.

This still seems at odds with Exagon's claims that the Furtive eGT is ‘first and foremost a grand touring car’, but Exagon confirms that a range-extended model is available as an option. With a petrol engine providing backup to the electric setup, range swells to 456 miles on the New European Drive Cycle. On account of its battery power, urban range is even greater - up to 501 miles is claimed. Exagon says the range-extended model could be perfect for those wanting to mix traditional Grand Tourer strengths such as continent-crossing ability with current ecological constraints.

The tyres, at 245/35 ZR20 at the front and 305/30 ZR20 at the rear, have been specially developed by Michelin to ensure both secure handling characteristics and low rolling resistance for extra efficiency. The car is suspended on aluminium double-wishbones all around, while the eGT's floorpan is completely flat ensuring minimal aerodynamic drag. Six-piston calipers at the front and four-piston rear calipers clamp 380mm and 360mm brake discs respectively - Exagon claims up to 1.2G of decelerative force, enhanced by battery-boosting regenerative braking.

Exagon's haute couture approach extends to the car's manufacturing process, where details are individually tailored to each owner. So far, no two eGTs have been alike. Production will be slow and steady; Exagon revealed to us that over 100 people have already made enquiries, while it expects to build just 1310 Furtive eGTs between 2015 and 2020. The company won't stop there, though - a convertible and four-door Grand Touring model are already in the works.

The eGT makes its UK debut at the ‘Salute to Style’ event at London’s Hurlingham club, running July 17 to 19.