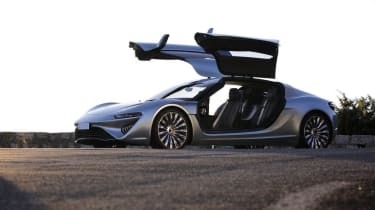 Following its debut at the Geneva motor dhow back in March, the Quant e-Sportlimousine has now been granted permission to test on public roads.

With a Zagato-style double-bubble roof and gull-wing doors that allow access to both the front and rear seats, it's certainly a striking design - but it's under the skin where the e-Sportlimousine's real intrigue lies.

The car runs on a new source of power known as 'flow cells'. Developed by German firm nanoFLOWCELL AG, flow-cells share attributes with electrochemical accumulator cell batteries and fuel-cell technology. A liquid electrolyte - ionic liquid or 'salt water' according to Quant - circulates through two parallel cells in each unit. Between these is a membrane, through which electrons flow as oxidation and reduction processes take place in each cell.

This electrical current can be used to drive the car through an electric powertrain. Due to the efficiency of flow-cell technology - around five times the power density of a lithium-ion battery - Quant has really gone to town on the e-Sportlimousine's drivetrain too.

Each wheel gets its own electric motor. Each of these produces 228bhp, for a combined 912bhp. Torque is even more staggering - each wheel develops peak torque of 2139lb ft, though it seems unlikely all this can be deployed in one go and a heavy-handed traction control system would seem a given. Claimed acceleration is brisk, to say the least – 0-60 should flash silently by in 2.8 seconds, while Quant predicts a top speed of more than 217mph.

In Geneva, Quant put the flow-cell's energy capacity at 120 kilowatt-hours. That's 40 per cent greater than the 85 kWh lithium-ion battery pack in a top-of-the-line Tesla Model S, and range is correspondingly higher - up to 370 miles, dependent on driving style. It isn't yet clear how, or how often you need to 'refuel' the e-Sportlimousine, though the car carries two 200-litre tanks of the liquid electrolyte. Fully fuelled, Quant's flow-cell car weighs in at 2300kg.

The e-Sportlimousine's numbers look impressive on paper, but they should be even more so on the road - and after a thorough inspection by Germany's notoriously strict TUV, Quant has been given permission to test the flow-cell coupé on German and European roads.

Quant says the company can now begin detailed planning with its partners, and is even considering an initial public offering to raise capital for expansion. Nunzio La Vecchia, chief technical officer at nanoFLOWCELL AG, says the company has ‘major plans’ - not just in the automotive industry, but the flow-cell's potential means it could have uses in the domestic energy supply, maritime, rail and aviation industries too.