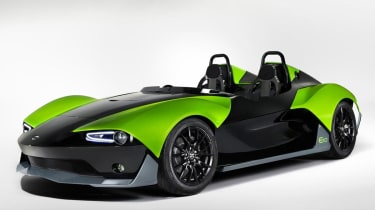 Zenos cars has revealed a faster version of its E10 sports car, named the E10 S. With a mid-mounted 250bhp 2.0-litre Ford GDTI EcoBoost engine, the E10 S can accelerate from 0-62mph in under 4.5sec and will power on to a top speed of 135mph.

The additional 53bhp of the S has been found thanks to the use of the turbocharged GDTI, an engine which has been borrowed directly from the Ford Focus ST. But thanks to the E10 S’s lightweight aluminium bodywork and carbon tub construction, it’s able to spin the needle up the rev counter far quicker than the five door hatch.

Power is sent to the rear wheels through a choice of transmissions, the most hardcore of which is a stick-shift six-speed ‘box that’s connected to a limited-slip differential when specced in an optional track pack. This also brings Zenos composite seats with four-point racing harnesses, a quick release steering wheel, heated driver’s seat, different wheels and adjustable performance dampers, all for an extra £3000.

In both S and non-S forms, the Zenos E10 utilises a set up not too dissimilar from what you’d expect to find on a single seater racer. Inboard pushrod suspension provides not just handling benefits, but also reduces repair costs in the event of an accident, whilst a central beam structure keeps torsional rigidity focused in the spine of the car. This also helps to keep the centre of gravity low, further improving handling.

The aero-focused bodywork has also been designed to warrant easy repairs, making the E10 an affordable and almost practical option for a track car. With its two-tone body, twin rear fairings ahead of roll hoops and somewhat barren interior, the E10 takes function over form but still manages to look angrily purposeful.

In its most basic form, the E10 S is available for £29,995, £5000 more than the standard car. Customers who’ve already order the standard E10 are being offered the chance to upgrade to the S, before deliveries of both cars are expected to arrive early March 2015. The low volume sports car has also been confirmed to provide the base for Zenos’ next two ventures, the E11 roadster and E12 coupe, which are expected to go on sale in 2016 and 2018.