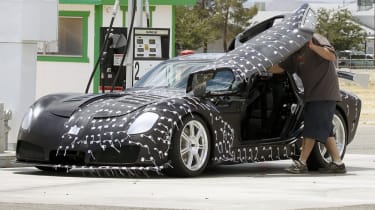 Devon was hoping to base the GTX on Dodge’s Viper, but is moving full speed ahead with its own design.

This is the very first time that the Devon GTX has been seen, driven on a track and photographed! Any and all previous 'photographs' were actually computer-generated imagery (CGI) and no concepts have ever put on display.

Although the interior still looks mule-like, the exterior looks like all it needs is a fresh coat of paint – as the carbon-fibre prototype was painted matt black. We’re guessing the look of the huge wing may change slightly before the GTX goes on sale in 2010, but the supercar looks like it’s all ready to go. Initial sales will likely be in the States, but we’re guessing sales will eventually extend to Europe and elsewhere. More details should become available on the GTX closer to its Pebble Beach Concours debut in mid-August.