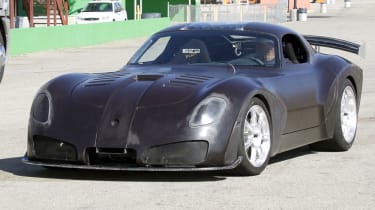 This obscure performance car is the Devon GTX.

Our spy photographers have nabbed it out testing a month before it’s due to make its world public debut at America’s Pebble Beach car show and Concours event in August.

It’s a bit of an oddball, but comes with some design pedigree – it’s the work of Swedish designer Daniel Paulin, who has a portfolio of work with Ford. The GTX is intended to combine classic influences with futuristic styling, something it seems to carry off pretty well in the official renderings – there’s a mixture of Corvette Stingray, Dodge Viper and Morgan Aeromax in there. It gets a glass roof and carbon fibre body.

The interior is equally interesting, with a ‘70s muscle car gear lever sat beside a very hi-tech electronic dashboard.

Driving wise, not a whole lot is known about the car. Devon had initially bid for the rights of the Dodge Viper brand, meaning a probable engine carryover at least. That fell through, but expect a similarly powered engine – upwards of 650bhp – which is likely to be a V8 or V10.

The GTX is set to attack the production car lap record of the Nürburgring, too, at the hands of Justin Bell. He’s the son of Le Mans legend Derek Bell and is a member of Devon’s race team. Radical’s SR8 has lapped the Nordschleife in 6min55sec, though, giving Bell and the GTX a lot to live up to.

Keep your eye on evo.co.uk for updates on the GTX and from Pebble Beach in August. The car’s likely to go on sale in the US in 2010, with no word on weather it’ll officially reach Europe.