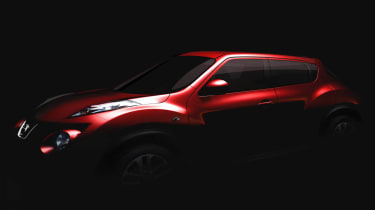 Nissan has confirmed the name of its new small crossover - the Juke.  Due to be unveiled to the world on February 10th, the Juke will go on sale in October and get its big debut at the Geneva Motor Show in March. It is based on the Qazana concept car shown at Geneva in 2009, and slots neatly between Nissan’s popular Note and Qashqai family cars. Unlike that pair, though, it boasts properly striking looks. Nissan believe this car will open up the small car market, and hopefully steal some sales from the hatchback crowd. It’s basing this assumption on the success of its larger crossover, the Qashqai, which has sold over 500,000 units in Europe since it went on sale.  The Juke is good news for the British car industry, too, with Nissan announcing it will build the new car at its highly successful Sunderland plant.