We've had the chance to put some miles on our new drop-top 370Z. So what do we think? 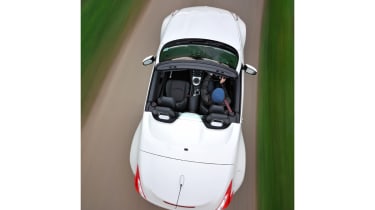 A month in and I’ve had the chance to get to know the 370Z Roadster a little better. So what’s been occupying my thoughts?

It’s definitely a woolly-hat kind of convertible. On the sort of cooler, overcast days that typify a British summer, the breeze passing over the car does tend to chill the top of my bonce. To be fair, I’ve found few convertibles cocoon the driver sufficiently to prevent this, and it’s possible it may not even be an issue for someone less follically challenged. The rest of me is certainly kept nice and toasty, thanks to the powerful heater and well-positioned vents – important details in an open-top car.

The auto gearbox has had me thinking too. It might seem like madness to forgo the manual gearshift with its nifty Synchro Rev Control feature, but I’m not so sure. The seven-speed auto really doesn’t feel out of place in the drop-top Zed. It’s smooth in auto mode and capable of particularly quick shifts – complete with rev-matching blips – when you’re flicking the column-mounted paddles. Am I missing changing gear with a stick? I genuinely don’t think I am.

I had to break the habit of a lifetime this month and refer to the 370Z’s handbook. When the car first arrived, a warning light seemed to suggest either the bonnet or boot wasn’t properly closed. But both were, and the illuminated symbol didn’t look quite right for this. It turns out that it refers to the Zed’s pop-up bonnet, a safety feature that increases the space between bonnet and engine in the event of a pedestrian impact. So the fault is with this. Not a show-stopper, then. I’ll get it looked at when I’ve got a spare moment, and in the meantime I’ll try not to run into anyone.