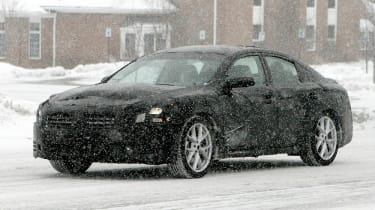 The seventh-generation Maxima will arrive next autumn, with a Renault-Nissan diesel powerplant to follow a couple of years later – likely in time for the 2011 model year. In addition to the diesel motor, a Toyota-developed hybrid system may also be available – and we’re expecting this as early as the 2010 model year! Watch for the uncloaked version to debut next month!