Lapping the Nurburgring was the GT-R's natural habitat 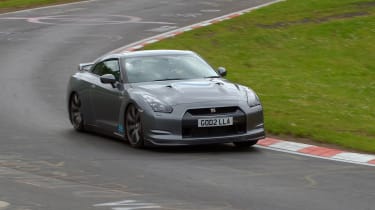 Last month’s trackday at the Bedford Autodrome took ‘Godzilla 2’ conveniently up to the 1000-mile mark, which meant it was time for it to have its free-of-charge post-running-in inspection. Nissan graciously offers a complimentary ‘concierge’ service for GT-Rs, which includes collection and delivery by transporter to either the nearest Nissan High Performance Centre or the supplying one, whichever the customer prefers, and I didn’t hesitate to send my car back to Middlehurst Motorsport in St Helens, as the folks there have endless experience in GT-R maintenance.

One wonderfully bespoke aspect of the new GT-R is that you can have its suspension aligned to one of three different settings: mainly motorway use, fast road driving or track driving. As the session at Bedford had revealed that Godzilla was understeering more than I like, I asked for my car to be tuned to the track set-up while it was at Middlehurst. But where best to try it out upon the car’s return? Although I had just got back from an epic 3500-mile trip across America in an 850bhp GT-R (see page 112), after just a few days’ rest I was ready for yet another lengthy road trip, this time to the GT-R’s spiritual home, the Nürburgring Nordschleife.

My mate Dino Lazarides has recently taken over a Nürburgring tour company (www.nurburgringuk.com), so it seemed sensible to join one of his trips. After an 8am ferry crossing from Dover to Dunkerque, we travelled in a mini-convoy through torrential rain to our hotel in Adenau, and after checking-in we were straight off to an informative ‘track walk’ with Nordschleife race specialists RSR to prepare us for the following day.

The next morning the rain had eased off and it was time to point the GT-R towards the legendary one-way toll road. Now, I’ve owned some ostentatious machinery in my time, but the level of attention the Nissan attracted in the Nordschleife car park was off the scale. I have never seen so many pictures taken of one car!

On the track, my first couple of laps revealed the mammoth 13-mile circuit was still treacherously slick in places, but thanks to the suspension tweaks there was far less initial understeer from the GT-R than at Bedford. With the buttons for gearbox, dampers and ESP all set to ‘R’ mode, there was some playful power oversteer to be had out of slower corners too. However, unlike at the wide, safe Autodrome, I felt no inclination to switch the ESP off fully…

As the track dried and I started learning what the car could do, it soon became very obvious that it was here where the GT-R was honed. It almost seemed to know its own way around the 70-odd corners, and the damping in particular felt quite perfect. What is curious, though, is that while the GT-R felt extremely flat through the corners from the driver’s seat, a glance at pictures of it in action reveals that this 2010 European-spec car rolls a lot more than the earlier Japanese versions that set (very slightly) slower lap times than this model last year. Strange.

Although the car felt totally at home on the Nordschleife, I never drove more than two consecutive laps because I was keeping an eye on the transmission oil temperature. Nissan is wary of gearbox failures, and if the oil goes above 120deg C you’re obliged to take your car to your dealer for an early (and expensive) fluid change.

In fact GO02 LLA behaved impeccably for more than a dozen laps over the weekend. It’s surreally capable on track, but equally happy on the road, making for great transport to and from the Ring. That said, now the GT-R is back home, I’m planning the first of several modifications for it. You didn’t really think I wouldn’t, did you?