Track outings in the GT-R have meant re-investment in tyres, transmission oil and brakes 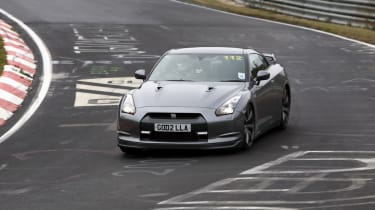 Since last month I have succumbed further to my carbonfibre fetish and ordered a gorgeous set of carbon bonnet vents and canards made by Auto Select, plus a smart carbon front grille by Mine’s. All these parts were supplied by TunerLab.jp (costing £1117 in total), and were fitted, along with some Nissan LED daylight running lights, at the GT-R’s six-month service by the experts at Middlehurst Motorsport.

Because I’ve done so many track miles and have taken the transmission oil temperature over 120deg C a few times, I was advised that I should also have GO02 LLA’s transmission fluid changed, so I decided to try some from Willall (£650) that is specifically designed to protect the GT-R’s dual-clutch gearbox. According to Willall, an Australian motorsport company (willallracing.com), its fluid will not oxidise and degrade like the standard Nissan stuff, even under severe use.

Other predictable victims of my track outings have been the tyres and brakes. As the worn OEM Dunlop runflats seemed highly questionable in the wet, I thought I would try the Bridgestone Potenzas that are standard equipment on GT-Rs in Japan and the US (£1117 for four). Meanwhile, Middlehurst supplied some grooved AP Racing front discs and I am now the guinea pig for some Ferodo DS2500 pads. The total bill for the brakes, LED lights and fitting the carbon bits came to £2608.

The new set-up was soon put to the test in a return visit to the GT‑R’s second home, the Nürburgring, on a trackday run by trackdays.de. I was pleased to see ten other R35 GT-R owners turn up, but the track was very damp. Initial impressions are that the Bridgestones appear to have a more progressive breakaway than the Dunlops, but the Ferodos don’t seem up to the job of confidently stopping the heavyweight Godzilla.

Nonetheless, it was an exciting (and scary) thrill being able to top 180mph on the main straight, and all 11 GT-Rs made it through the day unscathed, unlike several 911s, M3s and Lotii…