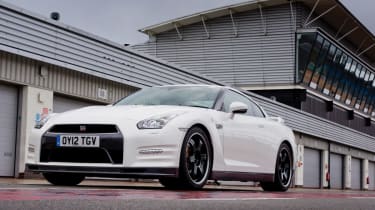 We've been waiting patiently since the Track Pack was first announced back in October, and Nissan has just announced that the first batch of cars has arrived in the UK.

The pack consists of a stripped out interior, light-weight wheels (which alone saves 10kg over the standard items) upgraded brake cooling ducts.

Brake cooling is an important factor when it comes to track work, and the improved ducts are very similar to those seen on the Spec-V, but the Track Pack retains the steel brakes. Kazutoshi Mizuno - creator of the GT-R - revealed that brake temperature was over 100-degrees lower than the standard set-up during testing at the Nurburgring.

Body rigidity has been improved, and a special track-biased suspension set-up has been achieved - but customers can switch the dampers back to a softer road setting for nomal use.

Official performance figures remain the same as the standard GT-R, and the Track Pack is available from one of Nissan's 22 UK High Performance Centres, from £84,450 - a £10,000 premium over the standard car.