One of the best-loved performance cars to emerge from Japan, we chart the history of the Skyline GT-R in this image gallery. 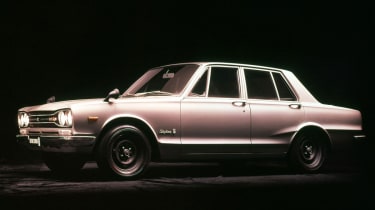 It could be argued that Nissan changed the face of the performance car world forever when it launched the high-tech GT-R in 1989. Those early cars dominated JTCC (Japanese Touring Cars) and international Group A racing, and the ease of tuning to in excess of 400bhp without substantial modifications, became legendary within tuning circles.

The GT-R made a name for itself in Europe when a standard road car apparently embarrassed Porsche’s lap record at the Nurburgring – sparking an unofficial rivalry between the two companies for over 20 years.

Read the full story of the Calsonic GT-R in the current issue of evo, on sale now.