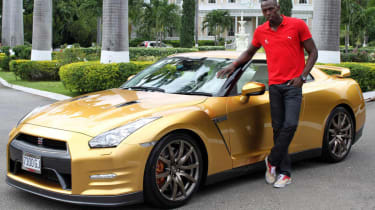 Usain Bolt has been given his Nissan GT-R special edition. The athlete – an Olympic gold medalist and firm fans’ favourite during London 2012 – received his appropriately and perhaps egotistically hued gold GT-R in his home country of Jamaica. Based on the new 2013 model year GT-R, which has 542bhp and a 2.8sec 0-62mph time, Bolt’s car also gets a white interior, a Bose sound system and ten-spoke RAYS forged alloy wheels. The sprinter selected the spec himself, and most elements (especially its paintwork) are unique to his GT-R. Unique, that is, apart from an identical car that was auctioned for 187,100 US dollars (around £120,000) late in 2012, nearly twice the price of a standard, more moderately styled GT-R. The proceeds are headed for the Usain Bolt Foundation, which promotes educational and cultural opportunities for children in Jamaica. The winner receives their car in the summer.