The Nissan GT-R boasts incredible performance and technology. Its top ten most interesting boasts are here 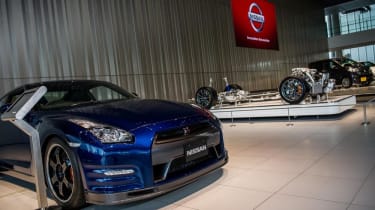 Nissan is proud of its GT-R’s hand-built engines, and has released a rather excellent gallery of images to celebrate one of the car’s lesser-known boasts. We saw it as a great opportunity to round up the best GT-R facts and technological features. Some you may know, some you may not. Here are the ten most interesting things about the Nissan GT-R…The GT-R is the world’s fastest accelerating production four-seater

The Nissan GT-R can accelerate from 0-60 in just 2.8sec, placing it alongside hypercar royalty such as the McLaren P1 and Ferrari LaFerrari. It even matches the ultra-lightweight Caterham 620R despite weighing three times as much. And on an open stretch of tarmac the Nissan would have the clear advantage, with its 193mph top speed helping it easily blast away from a 155mph 620R.

It’s the fastest four-seat production car around the Nurburgring

Incredibly, the GT-R recently lapped the Ring in 7m18.6s, which is 1.3sec quicker than Chevrolet’s fastest production Corvette, the C6 ZR1. This also means that amazingly, the GT-R is one of the fastest production cars to ever lap the Nordschleife, placing it at the sharp end of a list that includes both exotic two-seater supercars and stripped out track-spec machinery.

Despite being one of the most technologically advanced production cars in the world, each one of the Nissan GT-R’s engines are built entirely by hand by one of Nissan’s four Takumi. These Takumi are more than just experts, they are perfectionists, who are also responsible for building every one of Nissan’s racing GT-R engines. They apply the same level of meticulous detail to each and every engine, whether it is destined for the road or track.

The Nissan GT-R has near 50:50 weight distribution

In order to achieve perfect balance, Nissan’s engineers worked hard to ensure the GT-R’s weight distribution is comparable to that of a racing car. With the lightweight V6 up front and the transaxle sitting between the rear wheels, the weight distribution is split between front and rear almost perfectly. This brings a wealth of benefits to the car, enabling tremendous traction and sharper handling thanks to the car’s much flatter posture.

The GT-R is more slippery than a Ferrari 458 Italia

You might not believe it, but the four-seat GT-R is more slippery through the air than Ferrari’s 458 Italia supercar. With a drag coefficient of just 0.27, Nissan’s GT-R beats the 458 by 0.06 despite sitting 6.1 inches higher than the Ferrari’s 47.8in roof line. The GT-R’s clever aerodynamics ensure that air resistance is minimised, whilst working the air in such a way that downforce is maximised at high speed.The GT-R’s gearbox changes gear as fast a Ferrari Enzo’s

Just like the Ferari Enzo, it takes only 150ms to change gear in a Nissan GT-R. However, unlike the Enzo, the GT-R’s twin-clutch paddleshift gearbox can be adjusted to change gear less harshly, or even driven in full automatic mode. The GT-R’s gearbox is incredibly versatile, with the ability to shift like a supercar, or gently slide its way up the cogs.

The GT-R is better in the snow than an SUV

When it snows, don’t bother reaching for the X5’s keys; you’ll be better off taking the GT-R. With its ‘ATTESA E-TS’ torque-vectoring four-wheel-drive system, power to the GT-R’s wheels can be adjusted independently. This means in seriously low traction scenarios, the wheels with most grip will be utilised by the car’s intelligent system.

The technology wasn’t primarily designed for snow however; instead the independent four-wheel torque vectoring system was designed to help maximise traction off the line as well as at speed. The impressive acceleration times therefore owe thanks to this system.The GT-R’s suspension geometry can be adjusted at just the flick of a switch

The Nissan GT-R is fitted with complex suspension that allows the car to maintain stability at over 190mph, or ride without complaint across broken city tarmac. The GT-R’s Bilstein DampTronic dampers feature sensors that enable the firmness to be adjusted at each corner in accordance with the driving conditions.

Okay so it’s the 147 GTA model, but the GT-R’s claimed figure still trumps the GTA’s 23.3 combined mpg by 0.7mpg, despite being significantly faster and heavier. Matching the GT-R’s number will be harder in the real world, of course, but there are rumours the next generation GT-R will be fitted with a hybrid electric motor, which would be sure to boost power and efficiency further. Could we one day see a GT-R achieving 30mpg?

With all this technological wizardry, it would be insane to forget about the single point of contact between the car and road. Thankfully Nissan hasn’t forgotten, and due to having specifically designed run-flat tyres, the 2014 GT-R is being developed to withstand a flat tyre at a terrifying 124mph. These tyres not only bring added safety to driving, but also provide extra stability through less tyre wall flex, improving handling and increasing steering feedback.

Added to this increased tyre strength, Nissan also chooses to inflate its rubber with Nitrogen instead of compressed air. Nitrogen brings several improvements over air, but perhaps most significantly is its ability to remain at a stable pressure even under extreme temperature change. This means during times of fast driving, the tyres are less likely to overheat, therefore providing better grip for even longer.