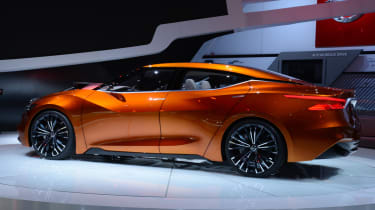 Nissan has revealed its Sports Sedan Concept at Detroit’s Auto Show, the car that is expected to hold many design cues for the soon to be unveiled US focused Maxima saloon.

Said to also hold influence for all of Nissan’s upcoming models, the Sports Sedan Concept’s low stance and aero-focused angles give the car an aggressive appearance that would look at home on any sports car. Rather promisingly, Nissan intends to feature these sporting elements on all models of future cars, and not just those focused on performance.

Other standout design features of the Nissan Concept include a unique ‘floating roof’, angular door lines and flush door handles. The interior also hints at upcoming layouts, with contrasting colours, metallic accents and coloured stitching bringing the modern styling to the cabin too.

The Concept’s front-wheel drive layout might not match its sporty exterior, but its 300bhp 3.5-litre V6 certainly shows much more promise for Nissan’s upcoming performance models.