Nissan will be returning to Bathurst after 22 years, with a team of Nissan GT-Rs. Details here 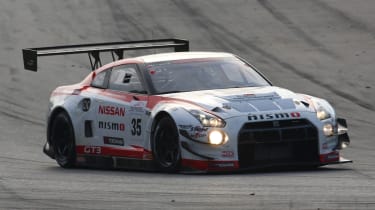 Almost 22 years since last conquering the legendary mountain, the Nissan GT-R will return to Bathurst to compete in the 2014 12 Hour race.

Fielding a combination of ex-gamers and racing legends in its ‘Nismo Athlete Global Team’, Nissan’s motorsport department hopes to take its super coupe race car to the top step of the podium.

Leading the charge of ‘Godzillas’ will be two-time Bathurst 1000 winner and 2006 V8 Supercar Champion, Rick Kelly. Joining him will be Nissan GT Academy Europe 2012 winner, Wolfgang Reip, whose promotion from gamer to racer has seen him enjoy podium finishes in both the Blancpain Endurance and FIA GT Series.

Nissan Development Driver Katsumasa Chiyo may be young, but his experience of the GT-R race car in the Super GT series should bode him well, whilst Alex Buncombe’s lengthy professional experience makes him as much of a vital part of the race team as he has been to the Nissan GT Academy.

Darren Cox, Nissan’s Director of Global Motorsport, explained that fielding such a mixed team was important to Nismo.

‘It’s great that we can field a team that shows the international nature of our driving talent and once again promote a Nismo version of the Nissan GT-R. Last time we were there with 'Godzilla' Jim Richards and Mark Skaife scored back-to-back Bathurst 1000 wins in 1991 and 1992.’