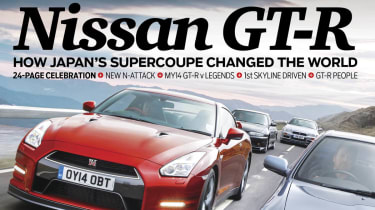 Buy a copy of evo 196 in our online shop

COLUMNSWhat do Joss Stone, Andrew Marr and Eric Clapton all have in common? And what’s it got to do with cars? Porter reveals all

LETTERSYour reaction to last month’s gathering of the greatest hot hatches and what we missed out, with plenty of love for the Peugeot 106, Lotus Sunbeam and, er, the MG Maestro

NISSAN GT-R: PERFORMANCE LEGENDWe celebrate one of the very best sports cars on sale, one which manages to mix genre-leading technology with real driver involvement, continent-crushing pace with four-seat practicality, and supercar-shaming acceleration with a relatively bargain price tag. Here are the key reasons why the Nissan GT-R has changed the performance car world, kicking off with a comparison of every 4WD version, right back to the R32 Skyline

McLAREN 650SThe McLaren 12C is dead, having evolved into the harder, faster, stronger 650S. But is it better? We find out on road and track

MISSION MOTORSPORTThe difference between ‘everyday legs’ and ‘racing legs’, and more: it’s the story behind the former military servicemen of Mission Motorsport

BMW M235i vs M3Based on the spiffing M135i, BMW’s new titchy two-door could be an affordable performance hero. But its older, more muscular uncle could seriously undermine it…

NURBURGRING SAVED!After several years of speculation and ill-advised rollercoasters, there’s finally some positive news for the world’s most talked-about racetrack. We meet the men promising a Ring renaissance

LONG-TERM TESTSDickie Meaden’s got a new long-termer in quite probably a unique spec. And he’s been on an adventure to celebrate

EVO KNOWLEDGEHow to buy an über-powerful Mercedes CLK63 AMG, and where in its motherland to go and find out how fast it will travel without breaking the law

Buy a copy of evo 196 in our online shop