Nissan Skyline addiction – one man and his many GT-Rs 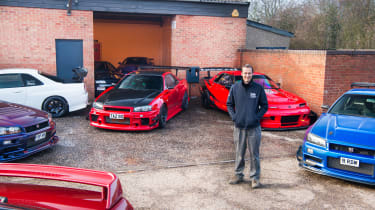 Behind the shutter door of a rather nondescript industrial unit, on just another industrial estate somewhere in England, is as fine an example of automotive obsession as you’re likely to find anywhere. And it’s brilliant.

Heated, and complete with a sofa, kettle, hi-fi system, and ‘facilities’, this extraordinary man cave also features GT-Rs: lots and lots of Nissan Skyline GT-Rs, squeezed into every last square millimetre of space – overflowing, in fact, into additional storage elsewhere.

Yes, Richard Wheeler really likes the original all-wheel drive turbocharged Godzilla. It’s a relatively recent passion of his that has swept like wild fire through his automotive life, and today he’s going to attempt to explain to me how this all happened in a calm, rational manner, albeit with a quiet, self-aware smile that says, ‘yes, I know this is probably a bit crazy’…

“I had a Skoda Fabia vRS which I modified, and then traded that in for a Nissan R35 GT-R”, muses Richard about the entirely innocent beginnings of his current GT-R armada. 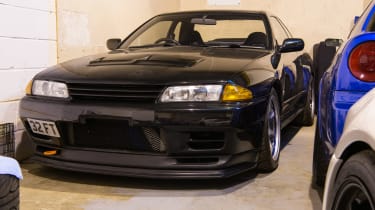 “I liked the R35, so I then had another one which I kept for much longer, wrapped it yellow, did some modifications to it, and took it to track days. But I fancied something more old skool, with a manual gearbox, so I bought my first R32 GT-R, a completely standard car which I ran alongside a daily driver Skoda Yeti. I upgraded the R35 to a new one again, but found I didn’t really need it – I had a sensible daily and a weekend fun car in the Yeti and R32. After four months and just 2000-miles the R35 GT-R was sold. This was 2014. Ground zero.

Nothing unusual so far, granted, but Richard was about to be bitten by a bug that has infected many a GT-R owner: tuning. In the space of a year, the innocent R32 he had bought went from circa 320bhp to 600bhp (and subsequently 680bhp), with braking, suspension and running gear upgrades to match, all while looking completely standard from the outside. Having created such a monster, it dawned on him that the development process – although something he really enjoys – may not be the most financially expedient way to go about having a biblically fast GT-R. As he says: “I wanted an R34 as well, and realised it was better to look to Japan and to cars that had already been modified already. Given it’s the old chicken-and-egg situation of either having the time to do the work yourself but not the money, or the money and not the time, buying cars already ‘done’ was much more realistic for me.”

So Richard bought a rare M-Spec R34 GT-R in gold: brilliant, except that he felt it was too good to modify, and by his own admission, then foolishly sold it on; with R34 values rocketing in the past 12 months, it would be worth considerably more now.

The next arrival was the Bayside Blue R34 you see here in the garage. Incidentally, it’s the only car in Richard’s collection that retains its standard 2.6-litre displacement, all the others running 2.8-litre ‘stroker’ versions of the famous ‘RB’ straight ‘six’. This is Richard’s NISMO car, with all the tuning parts being sourced from Nissan’s official motorsports arm, some of which came with the car; some of which Richard has added. While the aggressive bonnet and bumper suggest the same brutal power outputs as the other cars, this is ‘merely’ a ‘stage one’ car, and hence has somewhere in the region of 400bhp. “It’s such a nice car to drive”, notes Richard. “As it’s largely as Nissan intended, you can do anything with it, including putting the kids in the back or going to Tescos. You can drive it in any conditions – it’s not too powerful. It’s done over 60,000 miles and isn’t even a V-Spec car, but it’s one of the nicest GT-Rs I’ve ever driven.”

What happened next was driven by economics, and could therefore be labelled entirely sensible in terms of its logic. Realising it would be too expensive to modify the Bayside R34 to the kind of big power he’d got used to with the R32, Richard decided he needed another R34 to scratch that itch. “And that’s basically when it all got completely out of control”, he says, with a wry smile.

The ‘red car’ was the solution, and it’s completely outrageous. Built by Japanese tuning firm Autech Tsukada (ATTKD), it vanquished the famous Mine’s R34 to set the fastest time in the street legal time attack class at the Tsukuba Circuit. Granted, my only experience of the Mine’s GT-R was in pixelated form on Gran Turismo 4, but probably like a lot of us, that was enough to know it was no slouch. The red car is a riot of carbon fibre – bonnet, roof and boot lid – with carbon canards jutting from the front bumper, enlarged front wings with venting on their rear face, and a ‘GT500’ wing that is easily the largest aerodynamic device I’ve ever seen on a road car. The spec list for the car rolls on and on, but it’s a beautifully built thing – and it has around 650bhp. “I’ll take it out for half an hour, bring it back, try and calm down. In this weather it’d be backwards into someone’s front garden. It’s also too noisy for track days.” 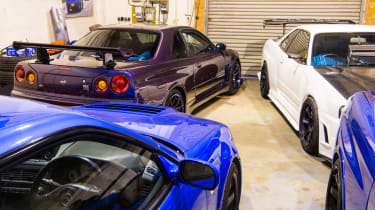 At this point Richard’s reasoning descends into fractions: if the Nismo was 50 per cent and the ATTKD 100 per cent, then he felt he needed a GT-R running at 75 per cent, or something along those lines. Enter the Tuning Factory Hosaka GT-R, “slightly less outrageous” than the red car, still with 650bhp and a roll cage, but with rear seats – a car usable on the road, or sort of. “Rational thinking”, as Richard puts it.

However, it’s entirely possible that Richard’s buying habits had been noted by his favoured importers, because on one ‘expensive’ night on Facebook he was offered not one but two more GT-Rs. And he said ‘yes’.

The first was the single turbo 800bhp blue car, which has a spec sheet of mind-boggling length and complexity. Purchased in the middle of last year, it was effectively paid for by Richard selling the McLaren 650S Spyder that he’d owned for a short period that year. “I wasn’t quite sure about it at first, but when I drove it the car put such a big smile on my face: the turbo kicks in around 4500rpm, so you’ve then got 3000rpm of your hair being on fire.” 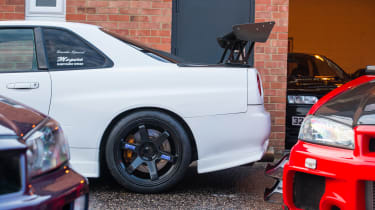 If the big turbo blue car was the 110 per cent GT-R, then the purple car is a torpedo through this rather tenuous method of justification. It was bought mainly on account of its colour – the infamous ‘Midnight Purple’ – the fact that it’s a good car and has 550bhp being a bonus. Oh, and there was another red R32 GT-R as well, with around 430bhp, but that’s not here – it’s about to be sold. “That was the only one I’ve bought with a view to selling on. It was a really clean car at a good price…and…I was buying the other two so…”

A similar logic applies to the black R32 GT-R, also with around 600bhp, which was bought from a UK owner after a huge amount of money had been spent restoring and modifying it. I think it might be my favourite of all of them – I want to drive it so badly it hurts.

Finally, there’s Richard’s race car for the forthcoming season, a famous R32-based machine built by marque experts RK Tuning. “It came up for sale last year and I knew I couldn’t miss the chance to buy it, but I also knew I wasn’t up to racing it in my first season. So I’ve been racing a Fiesta ST and an Elan, and will get out in the GT-R this year.” 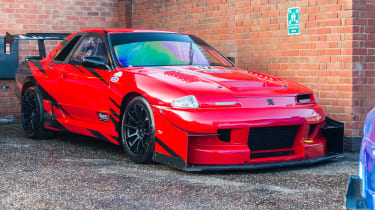 The car is probably as far as you can go with a GT-R before it turns into a space frame ‘silhouette’ racer: rear-wheel drive, 1080kg, nearly 700bhp, a driving position somewhere aft of the B pillar. “In the past it generally wins or catches fire. On one occasion it has done both in the same race.” Clearly Richard is in for an exciting season.

“Apart from the capital purchase, the cars don’t really cost anything as what little it takes to run them is more than offset by their appreciation in value.” He has a point: R34 prices in particularly have risen sharply over the past year, fuelled in part by massive interest in the US even though the cars are not yet eligible for use over there. One of Richard’s cars put on £10,000 during its boat journey over alone.

In spite of this, there are surely no more niches to be filled, no more fractional spaces to tick off in the collection, Richard? Richard? “Well, yes, but I did buy a Pearl White R34 V-Spec 2 a couple of days ago, so there is that one…it is a really nice colour. And rare.” Here we go again.

Shortly after our visit, Richard bought a yellow R34 GT-R.