Litchfield Imports will add up to 97bhp to your Nissan GT-R for little over a grand. Is it better to drive? 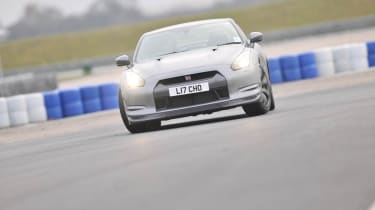 Litchfield’s upgrade for the mighty Nissan GT-R – a car that’s never ever been crying out for more power. However, because its 3.8-litre twin-turbocharged V6 is so eminently tuneable and its four-wheel-drive chassis so capable, very few GT-Rs stay completely standard for very long. Litchfield Imports was quick to spot the GT-R’s massive potential and now spends most of its days tweaking Nissan’s supercoupe to provide even more thrust. Here, £1095 takes you to 570bhp – up 97bhp on a 2008 model year GT-R, 47bhp on a 2010MY example.Technical highlights?

The kit includes a Milltek Y-pipe (that replaces two of the four catalytic converters), revised mapping for the ignition, variable valve timing and fuelling, and adjustable boost via the steering wheel-mounted cruise control switch (from an economy-improving 0.5bar up to a power-increasing 1.1bar, compared with the standard 0.8bar for the 2009 factory car). Litchfield has also treated this demonstrator to 2012-spec gearbox software, giving it much better low-speed manners and an even more magical upshift in full flight. It’s an extra £300 but it’s worth every penny. It gives you the latest launch control software too…

I’ll start with a negative. The Y-pipe adds some boominess to the exhaust at a cruise, though Litchfield does offer a quieter option with a resonator box with no drop-off in power and at no extra charge. That aside, the upgrade is phenomenally effective and seems like remarkable value. It doesn’t really change the fundamental character of the sucking, snorting, thrilling engine but there’s notably more energy in the mid-range. The boost builds very quickly and is sustained right up to the rev-limiter, giving a huge powerband to work within and astounding performance.

The chassis, predictably, soaks up the extra power with relative ease. As ever, if you just want to get somewhere quickly, the GT-R is composed and massively competent. Use all of the power and grip and it raises its game to incredible effect and asks you to do the same. Essentially it has the same zero-understeer poise and power-oversteer preference that is able to produce great quantities of adrenalin, but now with greater engine response and more ultimate power.How does it compare?

An estimated 0-60mph-time below the 3.0sec mark represents a drop of around a second, while a circa-200mph top speed is 7mph more than standard. Your £1095 certainly looks good value, and not just for GT-R club bragging rights.Anything else I need to know?

Litchfield’s upgrades reach right up to 1000bhp. With used GT-Rs starting at around £35,000, supercar-humbling has never been so accessible.