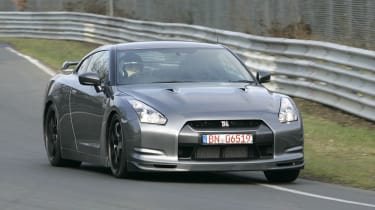 The visible changes are certainly subtle, but changes are more to be found under the hood. Nissan has also set a sub-7 minute 25 second Nurburgring goal for the GT-R V-Spec, which is 18 seconds faster than the current car. The GT-R V-Spec's turbocharged engine will see an increase in boost, raising output to at least 550 horsepower – up from the standard GT-R's 480 horsepower. This test car gets a revised front splitter, which sports some additional air intake slits, presumably to feed more cooling air to the brakes.

New six-spoke wheels also house what appear to be a revised braking system. The golden Brembo brake callipers were an ever-present feature even on the first GT-R prototypes, but they're a no-show on this tester. A closer look at the prototype's brakes reveal that the road-going GT-R V-Spec will likely use a carbon-ceramic setup.

The standard GT-R is no featherweight. And while it obviously overcomes any weight penalty in heroic fashion, it's compelling to imagine a GT-R that's some 150 kilos lighter. The V-Spec is rumoured to shave at least that much weight thanks to the use of carbon fibre body panels, and other assorted techniques. The prototype photographed has a portion of its rear wing blacked-out, suggesting it is one of the carbon fibre pieces that will make up the V-Spec package.